The history of our sirens

The history of our sirens

With passion, experience and quality to market leader

If you look back at when the first sirens were used to warn the population of danger, you have to go back several hundred years in history. Baron Charles Cagniard de la Tour, for example, is considered to have given the siren its name. However, he did not have the warning of the population in mind when he produced sounds from two rotating discs in combination with air pressure, which were louder and quieter depending on the rotational speeds of the discs. It was his penchant for acoustics, and when he was looking for a name for his invention, he probably thought of the sirens of Greek mythology, who beguiled the passing mariners with their song.

Soon it was realised that they could be used to alert the population to fires or, in the USA, tornadoes. The beginning of the Second World War in 1937 ensured the widespread use of sirens as a means of warning. About 11,000 sirens warned the population of air raids in Germany. Any other use was forbidden. They were only allowed to be used for air raid alerts and all-clear. After the war, the sirens lost their importance, but only for a short time. With the onset of the Cold War, a rethink took place.

Fear of a nuclear attack led governments to look at civil defence concepts. In the mid-1950s, the then Federal Government of the Federal Republic of Germany reorganised the protection of the population and began to expand a nationwide siren network with up to 100,000 sirens in West Germany. For this purpose, E57 motorised sirens were used, which - as their name suggests - came onto the market in 1957. A corresponding counterpart was also developed on the other side of the Wall for the Eastern states, the DS977 model.

The E57 motor siren, which was largely based on the technology of the L141, produces its sound with the help of a rotor in a housing pierced with slots or holes. The rotor is driven by an electric motor. The air movement generated by the paddle wheels of the rotor is interrupted by the housing, compressed and thus a wailing sound is produced. In principle, the motor siren thus uses the basic idea of the very first acoustic sirens: Air produces sound.

In addition, the government commissioned the development of a new siren with a higher output. This siren was to be the first high-power siren (HLS). It was powered by compressed air - basically going back to the first ideas of an acoustic siren. However, the performance of this new siren could not be compared with the devices from the 19th century.

It all began with this high-power siren

This siren marked the beginning of HÖRMANN's history as a siren manufacturer. As a subcontractor, HÖRMANN, until then a recognised specialist company for the installation of lightning protection systems, installed sirens throughout Germany. In 1966, HÖRMANN developed its own high-performance siren, the F71. Compressed air was forced through a rotor and emitted as sound via the siren horns. The siren required a compressed air tank for this. Compared to the motor sirens used until then, this compressed air siren produced a much stronger sound with 120 phon at 30m - equivalent to 120 dB(A) - and had a much greater range. This meant that far fewer sirens were needed. Calculations were based on a ratio of 1:30, i.e. instead of 30 motor sirens, one compressed air siren was sufficient. HÖRMANN thus became the supplier of high-performance sirens to the Federal Office for Central Civil Protection. A total of about 300 F71 systems were installed throughout Germany. The first prototype was located in Ruhpolding, Bavaria.

In 1975, not only was production expanded and further branches set up in Germany, but a successor model to the F71, the HLS 273, developed by HÖRMANN, was launched on the market. The new high-performance siren had significantly smaller siren heads and was visually very different from its predecessor, the F71, due to its four square siren horns. The new design and the lighter horns increased the installation possibilities and it was also possible to install this siren on tubular masts or without a mast on buildings. 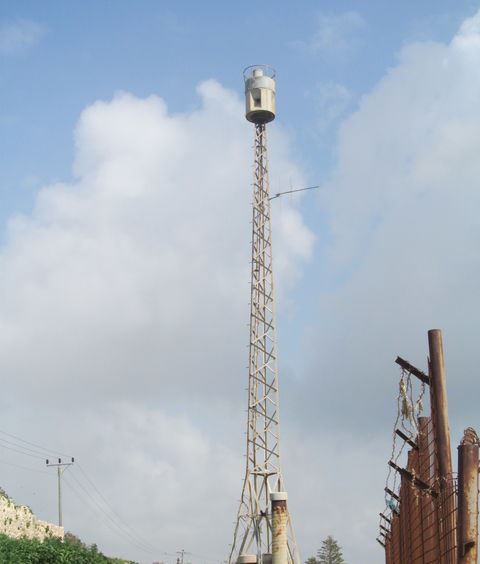 Focus on growth and export

For the first time, this HLS 273 was not only used in civil defence, but also in industry at home and abroad. The special version HLS 473, for example, was specifically designed for large companies and power plants. The range of services was also expanded. At the same time, the company increasingly focused on international markets. As early as the end of the 1960s, HÖRMANN concentrated strongly on exports and successfully installed the sirens worldwide. The siren was considered a leader, especially in Israel, the Arab states and Asia. In 1979, with the takeover of Raytek, HÖRMANN also opened its first company headquarters in Silicon Valley: HÖRMANN sirens were in the USA. One can proudly say: The HLS 273 laid the foundation for HÖRMANN to become one of the world's leading suppliers of siren systems as early as the 1970s - a status that HÖRMANN has not lost to this day.

The era of the electronic siren begins

Information technology and electronics increasingly found their way into product development. 1977 saw the founding of HÖRMANN Entwicklungs GmbH, which thus became involved at an early stage in the software and hardware development of siren controls based on microchips.  This laid the foundation for the electronic siren. After pneumatic and electro-mechanical sirens, the electronic siren was the third generation of technology. The ECL400 with 400 watts was one of the first electronic sirens. The signals were stored in EPROM memory chips and thus any desired signal tone could be programmed and played with the help of analogue amplifiers. Voice announcements were also possible for the first time. There was no longer any need for a compressed air tank, only a control cabinet. The entire siren was lighter and thus much more flexible to use.

In 1985, the siren pioneer reached another milestone. The first electronic compact siren ECN came onto the market. While the ECL still used the same four-directionally placed sound horns as the HLS, the ECN used a completely new concept of omnidirectional sound propagation. Although siren horns are usually oriented in only two directions, the signal is emitted 360° degrees. The principle is based on gap diffraction, also called Huygens' principle. 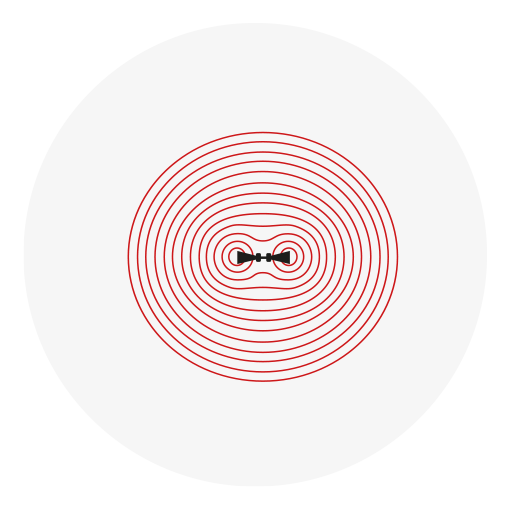 The electronic siren is now considered state-of-the-art. The new ECN model series was powerful and available with sound pressure levels from 109dB(A)/30m up to 123dB(A)/30m. Another novelty was the use of standardised 19-inch rack technology instead of freely wired assemblies in a cabinet. This makes the sirens much easier to maintain and retrofit to meet new requirements, as the components can be replaced easily and without special tools. 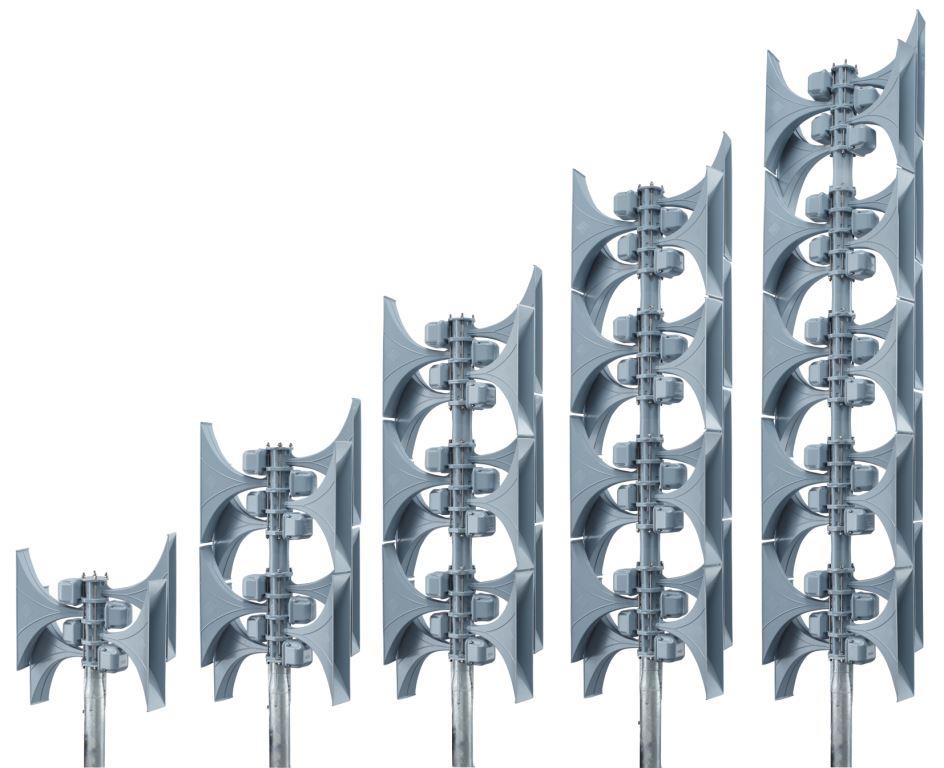 The new technology also increased the reliability of the siren in critical situations such as a power failure. The old-fashioned motor sirens necessarily require a three-phase connection and thus a connection to the power supply. Consequently, they do not work in the event of a power failure. The components of an electronic siren require so little power that the siren can be operated with a battery. It is charged either from the power supply or from alternative power sources such as solar panels. This significant improvement has increased the potential use of sirens as a reliable means of warning the public.

Warning the population of natural disasters

At that time, HÖRMANN installed and maintained over 60,000 sirens in the Federal Republic alone. With the end of the Cold War, sirens became less important, as the threat and thus the warning of the population was no longer considered necessary. Civil defence generally lost importance after reunification. The federal government began to dismantle over 40,000 sirens and the associated siren network. The remaining sirens were offered to the municipalities for adoption free of charge.

After a few years of standstill, a rethink took place. In Germany, many municipalities switched to replacing outdated sirens with new solutions and expanding the siren systems again on their own responsibility in order to warn the population in the event of a disaster. Now it was no longer about attacks from the Eastern bloc, but about fire, chemical accidents, nuclear accidents or even floods and high water. The increase in natural disasters opened up new areas of application for sirens and caused demand to rise. For HÖRMANN, it was time to become more internationally oriented. The company evolved from a manufacturer to a proven partner and supplier of individual, turnkey siren warning systems.  The sirens were expanded to include PC-based control software, gateways and remote control units. HÖRMANN was thus able to provide the complete infrastructure for siren systems of any size.

Thousands of sirens were delivered and installed worldwide, most of them integrated into a warning system with communication infrastructure and control centres for warning and informing the population. Today, HÖRMANN sirens warn of floods in the vicinity of dams and retention basins of mining companies, of tsunamis on Pacific coasts, Norwegian fjords and other earthquake-prone areas, of floods in England or Hamburg, of industrial accidents in chemical and petrochemical plants as well as nuclear power stations, of lightning strikes on golf courses as well as of general catastrophes in cities and communities, and they continue to be used to alert the fire brigade.

ECN-D - the leap into the digital age

With the experience gained from many national and international projects, HÖRMANN set another milestone in siren development in 2015. HÖRMANN was the first manufacturer to use digital amplifiers in the ECN-D product range. The change from analogue to digital amplifiers increased the efficiency to 97% due to the significantly lower energy consumption.

Independence from the power grid and high battery availability are, in addition to the reliability of the triggering mechanism, the most important criteria in siren development to ensure reliable warning of the population. With the even higher efficiency, availability increases with even lower power consumption. This is also reflected in the control cabinets, which can be significantly smaller with the ECN-D siren: 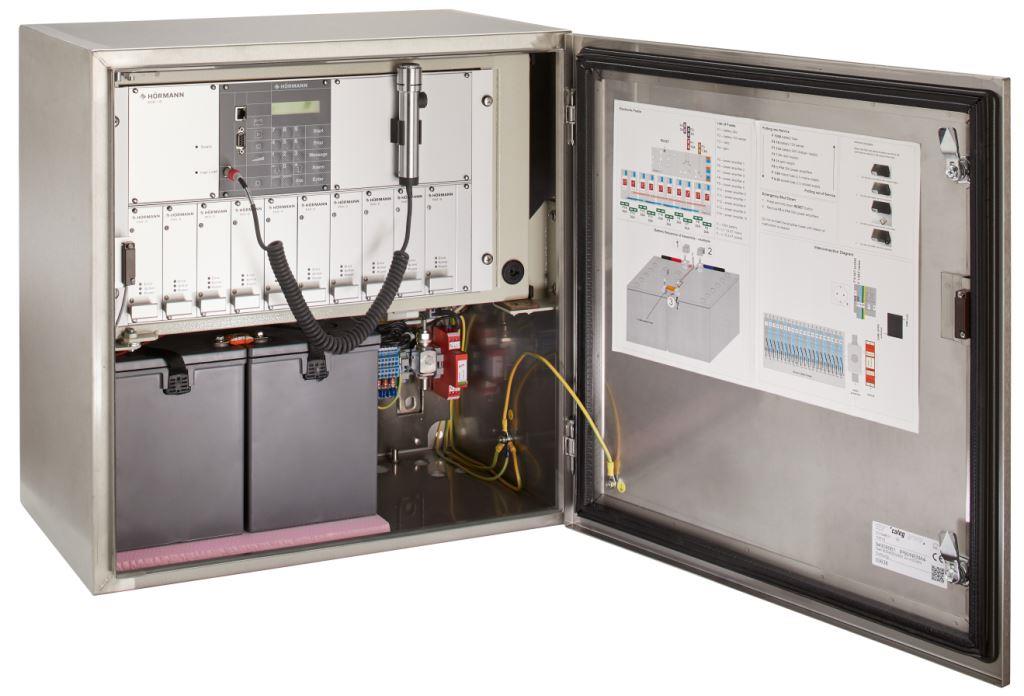 The fact that the decision in favour of 19-inch technology was characterised by foresight and customer orientation is also evident: old ECN sirens with analogue amplifiers can be converted to the new digital technology without having to replace the entire siren.

With digitalisation, the sirens' field of application expanded from a pure warning tool to a warning and information medium. Today's sirens warn AND inform the population. In addition to the alarm signals, recorded voice messages or live announcements can also be made.

To ensure that the electronic ECN-D siren continues to meet current and future requirements, it is constantly being further developed by HÖRMANN Warnsysteme. The modular design and the many interfaces, including Ethernet, fibre optic, satellite, allow individual adaptations to the different needs of the customers as well as the integration of new technologies. The fast reaction to different requirements is made possible by the company's own hardware and software development and the commitment to Germany as a production location. Thus, HÖRMANN Warnsysteme not only stood at the beginning, but still stands for high-quality sirens "Made in Germany" for reliable warning and information of the population.